Note that this section of the website is not particularly active; I hope to publish about one personal finance article per month.

In this article aimed at Canadian readers, I briefly explain what a Registered Retirement Savings Plans (RRSP's) is, and the strategic principles of why you would want to use them. My discussion is aimed at readers who are relatively far away from retirement. (There are similar savings vehicles in other countries which may have similar principles, but the details depend upon the specifics of tax laws.) I discuss why arguments that RRSP's will face tax disadvantages because "governments are broke" are questionable.


An RRSP is a type of account that allows you to hold investments, but it is not an investment by itself. You cannot "buy an RRSP", for example.

The key point to understand about an RRSP is that they allow you to defer taxes on income - you will pay taxes on the income, but in a later tax year. The idea is that this withdrawal should be at a lower tax rate, as you should generally expect to have a lower income in retirement than when you are working (after taking inflation into account).

Assets you hold within the RRSP grow without incurring taxes. This reduces bookkeeping, and means that RRSP's should compound much faster than investment accounts that are not sheltered from tax.

If you have a lot of RRSP room and you want to handle your own investments, it is probably best to put your RRSP investments into a self-directed RRSP. A self-directed RRSP is similar to any other brokerage account, although you have some limitations on your investments (you cannot use margin debt, for example). This is balanced against the possibility that you may have to pay a fee to have a self-directed account if the account size is below a certain size. Otherwise, you will probably end up placing your money in mutual funds, but you should not have to pay a fee.

I do not want to cover all of the details of what an RRSP is within this article, so I would recommend another source - such as the KPMG tax guide that I reviewed earlier - for more details. Instead, I want to write more about the strategic aspects. This article is aimed at someone who is at least a decade away from retirement, and should not need to withdraw funds from the RRSP in the near term. Someone who is closer to retirement will have to think about the mechanics of withdrawing funds, and the tax implications of doing so. For such people, dealing with a RRSP is much more tactical, as you are looking at relatively short-term tax planning.

The Value Of Deferring Tax 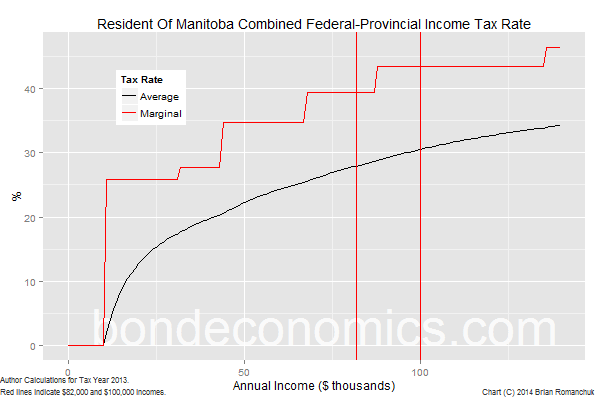 Income taxes are progressive: you pay a higher percentage of taxes the more you earn. The chart above shows the combined federal and provincial tax rates faced by residents of Manitoba. (I have chosen Manitoba as the tax situation in my home province of Québec is somewhat complicated, and I wanted a province with a higher tax rate.) The chart shows two lines:


Note that the tax calculations I use ignore any other factors that adjust the tax bill, other than the basic personal credit which has the effect that the first $9,000 (roughly) you earn is free of tax. Please note that I am not a tax professional, and it may be that my calculated tax rates may be missing some important factors. (I am basing them off tables from the KPMG book I referred to earlier.) That said, the strategic principles are not changed even if I my numbers are slightly off.

The key point to note is that the marginal tax rate is always higher than the average tax rate, unless your income is below the lower threshold for paying income tax.

It is now possible to see the advantage of an RRSP - the money you contribute to an RRSP is subtracted from your taxable income. It is thus removing income from being taxable at the highest marginal rate you face.

For example, assume that you lived in Manitoba and your income was a nice round $100,000, and you had no other factors affecting your taxes. Your taxes would be $30,530.

This means you save $7607 in taxes, which is 42.3% of the RRSP contribution. This is the average marginal rate over the interval $82,000 - $100,000 (which are marked by vertical lines on the charts). Your tax savings as a percentage of the contribution is going to be close to the marginal rate on your total income.

But you will have to sell the assets within your assets and withdraw them from your RRSP at some point. These withdrawals are taxable income.

In this case, you get a tax rebate at a rate of 42.3% when you contribute (the red line in the chart), but only pay an average tax rate of 28% (the black line).


One thing that has to be kept in mind is that you face "clawbacks" of social benefits in retirement if you have a high income (please see a tax planning book for details). For example, the Old Age Supplement may be taxed back if your income is high enough. This means that the effective tax rate is higher than what is suggested by my simplistic calculations above.

This should figure into your planning when you are already retired, or are close to retirement (less than 10 years). But let's face it, if you are worrying about a too high income in retirement, that's a problem that a lot of Canadians would wish they have. But if you are far away from retirement, this factor should not be weighed too heavily. You should not be concerned about scenarios where you are otherwise doing well, you should worry about scenarios where you are doing poorly. And if you do end up with a low income in retirement, you will not face clawbacks nor a high tax rate when you withdraw the money (see discussion below). In which case, the RRSP offers very considerable tax savings.


If you have a low income year, it is probably worthwhile not making a RRSP deduction in that year. Instead, deduct the contribution in a year where your income has bounced back (and will face a higher marginal tax rate).

If you have almost no income, it may be worthwhile to withdraw some money from your RRSP - you do not have to wait to retirement. If your income is below the threshold, you may end up paying no tax. But since such a withdrawal means you have lost the ability for RRSP assets to grow on a tax-sheltered basis, making a withdrawal may not be a good idea if you are young. Losing 20 or more years of tax-sheltered growth may be more costly than the immediate tax savings.


Personal financial planning is complicated by the fact that if you want to do it properly, you need to forecast variables like inflation and tax rates for decades. If you are young, you should expect to be earning much higher dollar amounts when you are older, just based on inflation. If tax brackets are unchanged, this would mean that the same inflation-adjusted income will end up paying higher taxes.

I would argue that the base case scenario should be that tax brackets will rise roughly in line with inflation. In other words, if your salary just keeps pace with inflation over the years, you should face about the same tax rate. The implication is that when I do my financial plan, I project the current situation forward indefinitely, with the assumption that all amounts are rising by the rate of inflation. (When looking at asset returns, that means that you need to deduct the rate of inflation from their returns.)


One complaint about RRSP's is that governments are allegedly "broke", and that tax rates will inevitably rise.

This is a topic of discussion on my main web site (bondeconomics.com). I am in the camp that is makes no sense to think of a government that can create the currency in which it borrows as being "broke". But even so, tax rates will not have to rise forever and ever, they would only need to rise during the peak years of the baby boom retirement. Unless some medical miracle arrives soon, the number of retirees relative to the number of people working will start falling after about 20 years or so. Any tax hikes related to demographics should begin to be reversed at that point, as the strain on the welfare system would fade.

Of course, tax rates could rise for other reasons. It is possible that the political shift to the right that we have seen over the past 30 years may reverse, and the size of governments could once again start to increase. It is highly unlikely that anyone could accurately forecast such a shift, and so I would not build retirement financial plans around such a scenario.

Comments are moderated, and so there is a delay before they appear.